The Work of the Cooper 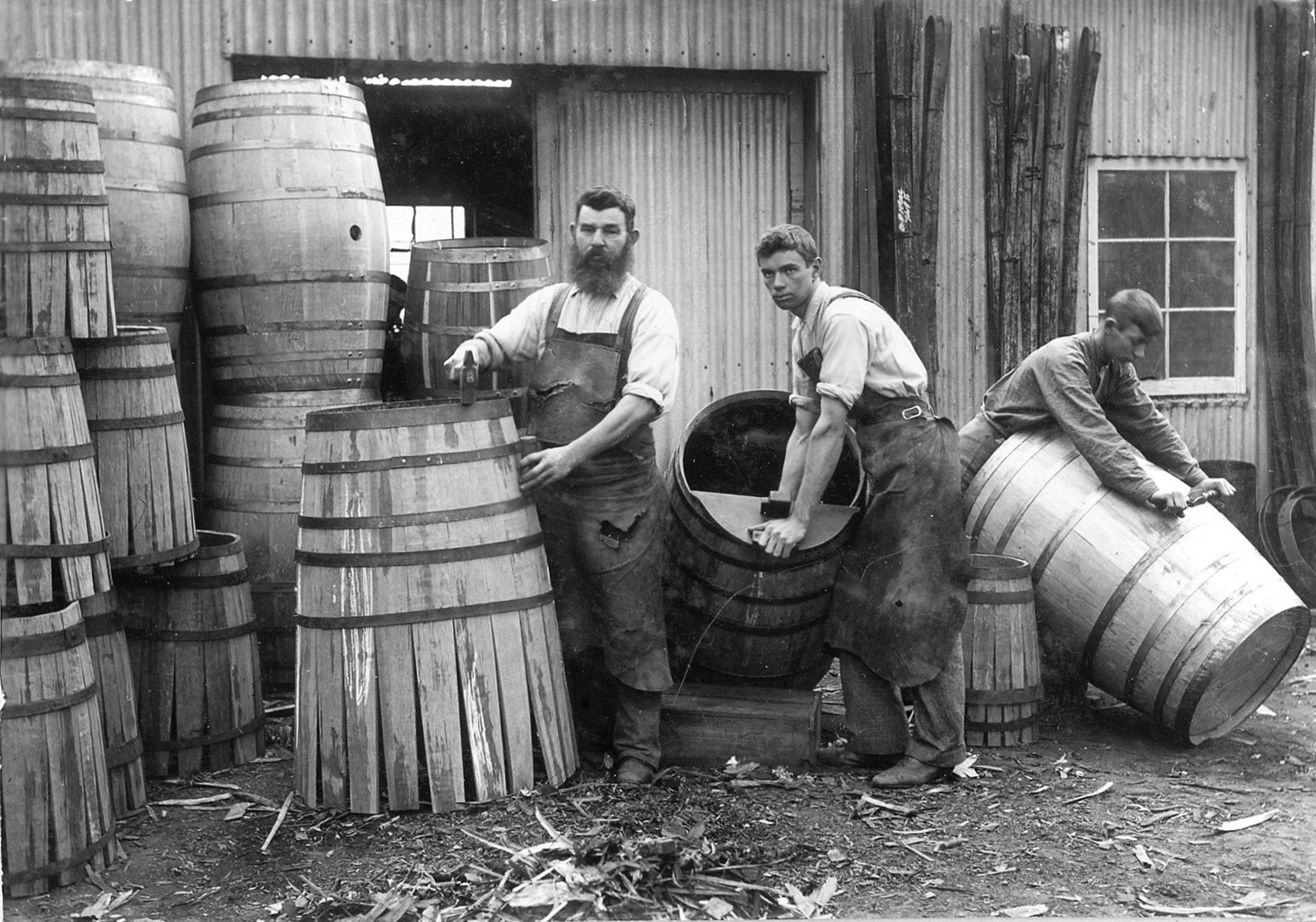 Coopering is highly skilled work, which requires a long and arduous apprenticeship.

A Cooper makes wooden-staved vessels of a conical form, of greater length than breadth, bound together with hoops and possessing flat ends or heads. Examples of a cooper’s work include but are not limited to casks, barrels, buckets, tubs, butter churns, hogsheads, firkins, tierces, rundlets, puncheons, pipes, tuns, butts, pins, and breakers. The word is derived from Middle Dutch kupe, basket, wood, tub and may ultimately stem from cupa, the Latin word for vat.

Traditionally, an apprentice Cooper would be expected to begin learning the trade at around the age of seven years. The apprentice would be introduced into the Company and, having been accepted, work under the supervision of an established Master Cooper. He would then spend between six and seven years learning the Coopering trade. Having served his time, his Master and several brothers from the Company of Coopers would examine the apprentice's work and if his work was of the required standard then the Master would arrange to have the apprentice formally admitted to the Company as a Fellow Craftsman. Once given the status of Craftsman, the new Cooper could either remain with the Master at the same Cooperage or leave his service to perhaps either work for another Cooperage or even to establish his own.


The Coopers Company of the City of Newcastle upon Tyne is highly active in the modern revival of this ancient skill. In recent years, there has been a major upsurge in the demand for new craft beers and whiskeys which rely on wooden caskets for their exceptional taste. Consequently, there has been a major rise in demand for skilled Coopers, particularly in Scotland.

Modern technology, specifically CNC machines, has enabled a new generation of Coopers. It's now possible to produce very high quality, precision barrels in a relatively short space of time and the Coopers of Newcastle are actively researching the techniques required to resurrect this trade.

Like many of the Incorporated Companies, the Coopers Company does not have a Constitution or a set of rules. Instead, it relies on the basic principles of good governance and common sense, and when these are not sufficient, for instance where matters of discipline are concerned, we fall back upon our ancient Rule Book and Ordinary, which are held in trust at the City’s Archives.

The City’s Archives are presently located at Blandford House, Newcastle, which also houses The Discovery Museum. The main thoroughfare takes you past Charles Parsons’ record breaking Turbinia, which dominates the entrance foyer. The archive itself is on the ground floor towards the rear of the building and is accessed via an imposing oak-panelled corridor replete with Art Deco stained glass, which betrays the building’s original purpose. Built in 1899, Blandford House was the headquarters of the Co-operative Wholesale Society and the distribution centre for over 100 Co-op stores across the region. 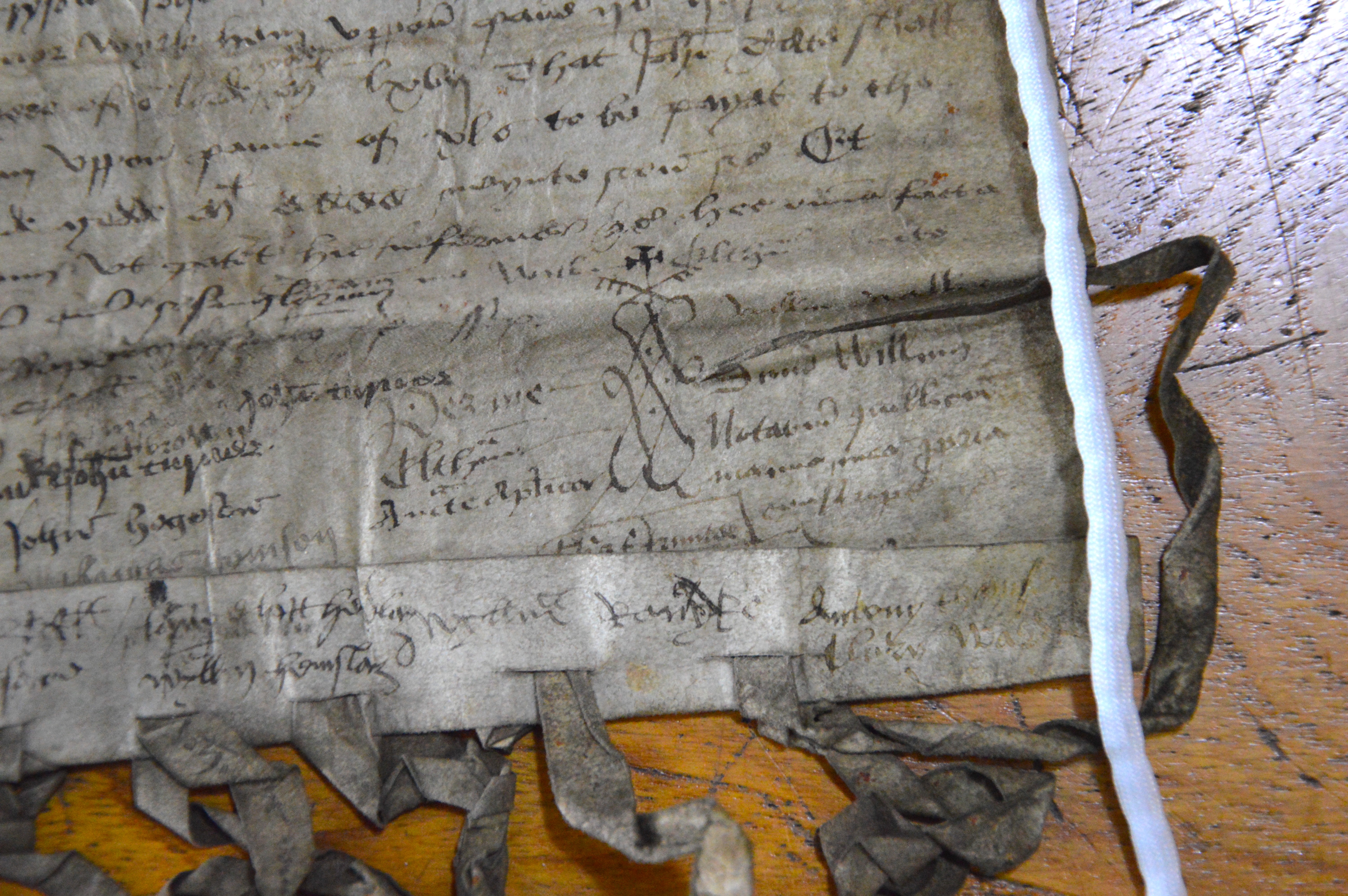 Upon entering the archive, the custodians explain the rules and regulations governing access to the various artefacts, and the charges levied when taking photographs. For instance, you cannot use any writing implement which might leave a permanent mark so only pencils are allowed. Scrap paper is available but a small donation is required if you find yourself with nothing to scribble on. To the best of my knowledge, only Company Stewards can view original documents. Company Keepers must use one of the Microfiche viewers, which can be booked in advance.

A loose-leaf folder details the documents held in trust by the Archive. The earliest documents available were our Rules Book, dated 1510, and a copy of the Company’s Ordinary from 1536. The Ordinary is an extremely fragile parchment sheet, about fifteen inches by ten inches. Hard to imagine that this document was created when Elizabeth the First was on the throne. Sadly, most of the text was illegible to my untrained eye but the collection of signatures, each in a different hand, was mostly legible. Presumably these signatures belong to the founding members of the Company.

The Company Rules Books were more informative. The earliest entry was from 1510 although there were several older entries without a date. The handwriting was extremely variable, reflecting the change in Secretary from year to year. In some cases, the script is clearly legible. In others, it is an indecipherable scrawl.

Many of the entries allude to the working practices of the Company. There are descriptions of apprentices starting work, contributing to the business, and thereafter being admitted to the Company. Company Keepers would pay the Company to make introductions on their behalf or to do business with other craft guilds. At a meeting held on the thirty-first day of January 1666, Gawen Reed and Nicholas Brown both paid the Company the sum of one shilling for taking an apprentice, or Journeyman, into their workshops.

However, a significant proportion relate to fines imposed for breaking Company ‘rules’. A fine of three pence would commonly be imposed for speaking out of turn. On 11th July 1666, John Todd was fined one shilling for proclaiming “God! But it’s hot!” and at the same meeting, Thomas Robson was fined three pence for smoking without leave.

Missing a meeting carried a heavier penalty. On 30th June 1664, Daniel Stanger and Bartholmew Hall were fined sixpence for being absent without permission. On 4th February 1670 Thomas Richardson, Richard Smith and Thomas Pearson were each fined for attending a funeral when they should have been at the Company Meeting, which seems a bit harsh when viewed from our perspective. Heavier fines were imposed for ‘dodgy’ practices, such as reusing butter caskets and thereby tainting the beer. On 1st October 1666, Humphrey Davison was fined three pence for selling an unmarked Firkin and, at the same meeting, Bartholmew Burrell was fined six shillings and eight pence for calling away men from Robert Jackson’s shop.

A few names do appear more than others. For instance, at a meeting held on the 18th May 1665, Thomas Betson was fined for saying unbrotherly words and that he cared not a fart for the Company. On 23rd June 1656, a complaint was made against Betson by Company Keeper Gawen Reed for pulling Reed by the hair.

Neither were our ancestors beyond a childish joke. On 7th May 1666, Thomas Robson was fined for coming to the Meeting House without a cloak. Curiously, on the line below, we find two entries stating that John Cramlington and William Lumsden were each fined one shilling for hiding Thomas Robson’s cloak.

Bad behaviour away from the Meeting House was strongly discouraged. On 29th November 1668, William Leach was fined six shillings for beating Thomas Pearson. On the line below, we find that George Lumsden was similarly fined for beating William Leach, it would appear, at the same funeral. As might be expected, Coopers were required to uphold and maintain the good name of the Company and a heavy fine was levied against any Company Keeper who broke that rule.

Respect for the Company Stewards was deemed essential. An entry dated 19th June 1656 details a fine of six shillings and eight pence levied against Barnard Simpson, Andrew White and several others for abusing of the Stewards, contrary to order. In today’s money this is over fifty pounds each and would be clearly intended to encourage respect for the those in charge of the Company.

I came away with a better understanding of our ancestors, of their practices and habits, and their crimes and misdemeanours. Perhaps more so, I came away thankful that our Head Meetings are far more orderly than in former times. Mostly.